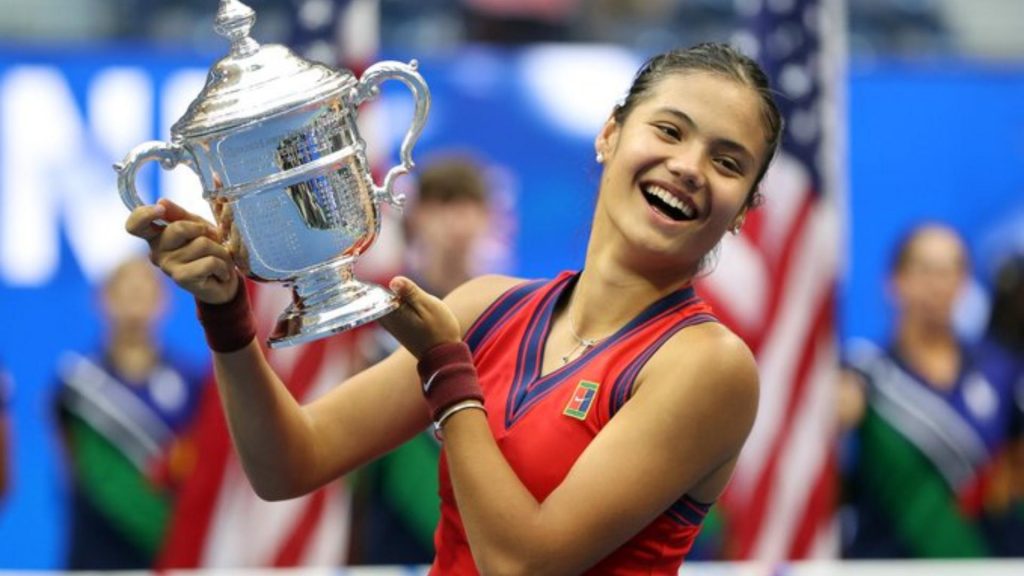 At the beginning of 2021, Emma Raducanu was an 18-year-old schoolgirl taking her Economics and Mathematics “A” Leval exams in Bromley, Kent, England. By the end of the year, she was the latest female tennis sensation, worth an estimated £10 million. How quickly life can change.

She may not be the youngest ever winner of the US Grand Slam, that is still Tracy Austin, who won the crown at Flushing Meadows in 1979 when she was only 16 years, 8 months, and 16 days old. When Emma Raducanu lifted the US Grand Slam trophy, she was 18 years, 10 months and 11 days old, making her the 7th youngest female ever to have won the title.

She does have another claim to fame, however, and that is that she is the only player in the world ever to have won a Grand Slam as a qualifier.

Radacanu first burst onto the senior tennis scene earlier in the year at Wimbledon. She surprised everyone by getting through to the round of 16, where she, unfortunately, conceded the match in the second set, suffering from breathing difficulties. Nonetheless, it was her first big payday as she scooped prize money worth £181,000, which she handed over to her parents for safekeeping.

She then helped herself to the $2.5 million top prize two months later when she beat 19-year-old Canadian Leylah Fernandez, 6-4, 6-3 in the final at Flushing Meadows. It was the first time in over 20 years that two teenagers had faced each other in the final.

A girl as pretty and talented as Emma Raducanu is a sponsor’s dream, and shortly after winning the US Open, she appeared in a Dior Grecian inspired dress at the premiere of the latest James Bond movie, No Time to Die. Dior then announced she would be their latest ambassador for the fashion house’s Maria Grazia Chiuri’s womenswear collection and the face of their skincare and makeup product offering, overseen by Peter Philips.

Another fashion icon, Tiffany & Co., was also keen to sign up the young tennis star, and under the management of Max Eisenbud, the vice president of talent management company IMG, and the man behind Maria Sharapova’s glittering career (reportedly worth £200 million), it is predicted that young Emma will make £20 million is sponsorships over the next two years.

Whatever happens next for Emma Raducanu, 2021 has been a phenomenal as well as a lucrative year. She is the first British female tennis player to win a Grand Slam for 44 years, a feat even praised by HRM Queen Elizabeth, who praised her for her hard work and dedication, saying it was a remarkable achievement.